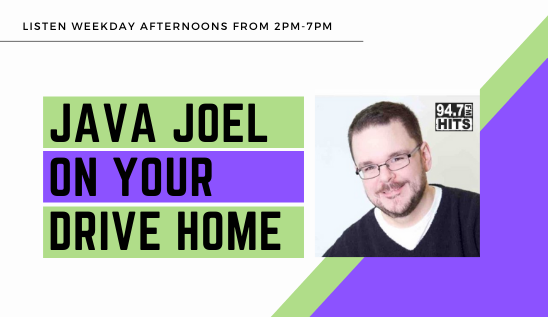 Java Joel grew up in far upstate NY listening to great Montreal radio stations like CKMF, CKOI, the old CKGM (Who remembers 990 HIts???) and CHOM-FM (back when it was good!). He’s a hardcore radio nerd who has been a part of 94-7 Hits FM since way back in 2006.  Officially the longest-running personality on 94-7 Hits FM! His 1st year on the air, he scored the Montreal Mirror Reader’s Choice Award for Best Radio Personality and Best Local Radio Show in 2007. In addition to Montreal, Java’s programmed and has been heard on radio stations all around North America in NY, Chicago, Miami, Cleveland, Cincinnati, Louisville, Portland OR, Pittsburgh and more.

One of his favorite things to do in Montreal is hittin’ up La Banquise (he recommends La Shoot-Out, btw. It’s amazing!) and going for a stroll in La Fontaine Park. Honored to be on the radio in Canada’s most amazing city (Sorry, Toronto!). You can hear Java – and his sometimes unpopular opinions – weekday afternoons from 2 ’til 7 playing Montreal’s HOTTEST Music. Hit him up anytime with a text – 800-947-0947.