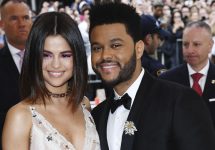 Selena Gomez and The Weeknd are OVER!

From TMZ: It’s been very interesting watching Selena Gomez spend all of her time with Justin Bieber lately. We were wondering what was going through The Weeknd’s head. Reports surfaced ...Read more

Kim Kardashian On Ellen … Kim cries when she relives her Paris robbery. She says it was meant to happen to her. Kim says she’s NOT ‘materialistic’ anymore.  Audio Dr. ...Read more

2015 ”Bachelor” star Chris Soules was arrested after he slammed into a tractor, killed the driver and then fled the scene in Iowa. Chris was driving his pickup truck when he rear-ended ...Read more

Remembering Erin Moran From Happy Days’ … Erin Moran, who played Joanie Cunningham on the hit TV show ‘Happy Days’, died over the weekend. She was 56. The first clip is a ...Read more

Christina Applegate On Conan … Christina says Friday’s are ‘Wash Your Hair’ Day at her house. When Christina doesn’t want to take her child somewhere she says the ...Read more

Olympic Gold Medalist Simone Biles On Ellen … Simone just turned 20 years-old. She wants to move out of her parents’ house. She doesn’t know if they will allow that. Simone ...Read more

Jennifer Hudson Recently Won $75 In A Karaoke Contest … she went to a random bowling alley in Florida and entered a karaoke contest. The hosts didn’t know who she was. Jennifer won ...Read more

John Stamos And Bob Sagat On Jimmy Kimmel … Bob remembers going out to dinner with Don Rickles and his wife. Bob got Don in trouble with her. Bob ordered something for Don he ...Read more