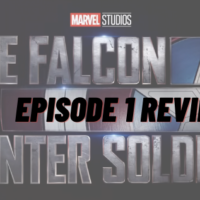 On Friday, March 19 Disney+ released marvels newest addition the The falcon and the Winter soldier. Spoilers ahead

Before we review let’s recap what happened in the episode. The episode starts up with the first scene being of Sam ironing his shirt and putting on a suit and packing for what we assume is a trip and then holding the shield that Captain American had given him at the end of endgame. After, next scene jumps to Sam being on a mission with the US Army and after the mission goes successfully Sam meets up with one of his colleagues for coffee as they discuss the new threat that has been surfacing. Essentially, post endgame what has been happening in the world is a divide between people who felt like the world was better, when half the people disappeared and people who feel that it’s better to have them back. After the next scene, we see Sam go to Washington to hand over Captain America’s shield to the museum dedicated to Captain America. Since, throughout the episode we seeing Sam being conflicted with taking up the captain America monicker because he feels like it doesn’t belong to him including the shield, which he discuss with James a.k.a. war machine, who make an appearance in the episode.

Afterwards, the next scene is of the Winter soldier, where we see Bucky on an assassin mission from the past, where he murders a few people including a student. But, this was all a dream that Bucky is having, essentially he’s reliving his past and going to therapy and having trouble with dealing with all the aftermath of being in constant state of war for the last few years. Although, Bucky is trying to make amends by taking down the power that he helped put in place. Additionally, we even see that he has made friends with the father of the boy, who he murdered as a form of redemption. Ultimately, what’s interesting about the episode we get to look into the lives of Sam, for instance the relationship Sam has with his sister and how his family business is in turmoil financially. Also, we also get to see Bucky mental state and we even get to see him go on a date and talk about how he feels, like he’s missed placed in time. Afterword, we get to see Sam’s Colleague goes on a undercover mission to infiltrate the uprising terrorist group. Ultimately, this new threat has made its way to the news and to the world. Thus, the US government decided to give captain America’s shield to someone else and announce that he will be representing America as a US agent, Obviously, we know this is extremely disrespectful to Sam and to the Avengers because this was done behind their back.

Furthermore, this episode was interesting because we got to explore the lives of Sam and Bucky, although they didn’t come into contact we know Sam has reached out to Bucky on many occasions, thus hopefully we get to see them Reunite.

Overall, just like WandaVision the series has a slow start but I believe with more episodes will go deeper in character development in story.