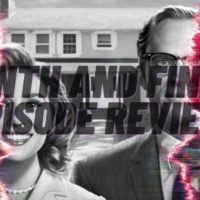 WandaVision Review of the Final Episode On March 5, 2021 marvel aired its final episode of WandaVision on Disney+. Spoilers ahead !

The episode was full of cinematic moments from the start to finish and left us wanting more. Here’s a mini recap of what happened.

The episode opens up where we last left off with Wanda and Agnes going head to head with each other, while Agnes has Wanda’s children trapped. Eventually, Agnes let’s go of the children afterwards and Wanda that tells them to go back inside the house. Additionally, Wanda and Agnes a.k.a. Agatha battles it out, which ends with a fun nod to the Wizard of Oz as Wanda strikes Agatha with a car, when Wanda goes to check to see if she has done any damage to Agatha she finds only boots under the car. Obviously, we know that Agatha is too powerful to be stopped by a simple car. However, were interrupted by Vision two point no or white Vision, who has been programmed by Hayward to stop Wanda and destroy Vision but our version of Vision is able to stop White Vision from hurting Wanda.

The episode features some epic battles, such as Wanda and Agatha battling out in the sky, Vision and White Vision battling it out as well. Also, have the twins, who take on S.W.O.R.D agents with the help of Monica. These moments truly represent Marvel cinematic flair and energy. For example, the editing style definitely reflects Marvel’s Avengers Endgame ,which goes back in forth to different characters in different locations essentially fighting the same fight. Ultimately, the S.W.O.R.D agents are stopped by Monica and the twins and Hayward is arrested for his crimes against Wanda and everyone. Vision and White Vision come to the conclusion that there are both Visions in their respective way, thus White Vision goes off into the sky and that’s the last were see of him. Meanwhile, Wanda uses the tricks that she learned from Agatha, specifically the ruins to trap Agatha and take all Agatha power and become the scarlet witch this scene is essentially beautiful because we see Wanda become the comic book character with costumes and everything.

All in all, the episode ends with Wanda removing Agnes powers but also her memories and trapping her in the character that she chose to play in Wanda’s reality but also Wanda releases the town from her fantasy, which causes Vision and her children to disappear in a very sad and touchy manner because we understand that Wanda is remorseful for what she has put the towns people through. But, also by releasing them and the town she’s also releasing and ending her family that she built.

Then, we see Wanda interacting with Monica saying that she’s going to figure out how to use this chaos magic as she goes off into the sky with her scarlet witch attire. However, the episode doesn’t end there because we get not one, but two post credit scenes. The first one being with Monica and A Kree, who tells her she was sent by one of her moms old friends and it’s time for her to go back into the sky. But, our next post credit scene, we find Wanda In this beautiful cabin in the mountains, where she’s studying the book of the dam, which is the last shot we get, as we hear her children scream for her in the background in her mind. Ultimately, WandaVision had us on this endless roller coaster of emotions but it was announced by Marvel directors that Wanda will play in important role in the next phase of the MCU. And we can’t wait to see what will happen next. Hopefully season two will be even better!