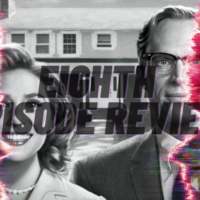 On Friday, the 26th, 2021 Marvel dropped its latest episode of WandaVision on Disney plus. spoilers ahead! Now if you have been following along the last few episodes have really left us on the edge of our seats, but this episode has really cleared up a lot of things for us, for instance one of the main burning question of the whole season has been, who has been the mastermind behind all of these events. Answer and confirmation is that Wanda Maximoff has been the author and designer of this reality, however she’s not the villain that we may think instead throughout this episode we’re taken on a journey through Wanda’s memories and defining moments and what caused Wanda’s breakdown. For example, the episode opens with a flashback of Agnes‘s life prior, in Salem, in the 1600s and we understand that Agnes is not one to mess with and that she is extremely powerful.

Then, we jump back to Wanda and Agnes discussing how Wanda was able to control all those people but Wanda doesn’t have any real recollection of how she was able to do all that manipulation. Therefore, Agnes takes one hair follicle out of Wanda’s hair and is able to go into the mind of Wanda with Wanda by her side. Moreover, in the first door we are brought back to a memory of Wanda’s childhood with her brother and her parents, where we find out that her father used to sells tapes of American sitcoms. Which explains why Wanda’s suburbia is influenced by American sitcom. After, that we’re brought into a memory with Vision at the avengers bass, where Vision tries to comfort Wanda after the loss of Pietro, which showcased that Vision care about Wanda. Afterwords, we’re brought to the memory of when Wanda joined Hydra, where she first interacted with the Tesseract, in which she got a vision. The vision was actually in the depiction of the Scarlet Witch in the comic books. Afterwords, we’re brought to the memory of Wanda’s interaction with Hayward and the truth behind that interaction is not that she stole Vision’s body but that she just wanted closure.

Finally, the last memory is of Wanda arriving at the small town, in which we see her holding a map with a heart around the compound that vision had originally bought so they could grow old together. However, consumed by grief and sadness Wanda just like, in Age of Ultron, her magic consumes her, which in that moment she’s able to create a Vision and everything else surrounding them. After, the truth is out Agnes runs out and

Wanda follows her demanding her children back, which Agnes has tied to her as Agnes floats in the air in her witch attire. However, Agnes tell Wanda that the only reason she’s able to do all of things is because she has chaos magic running through her bones and she is the Scarlet Witch. At the, we get a post credit scene, where we see the real body of vision being reanimated by Hayward.

All in all, this was a fun episode that helped us really understand Wanda Maximoff because now we know that Wanda didn’t necessarily anything consciously that it was her grief that created all this madness really humanize her and will help us forgive her in the long run. We know that in the comics Agnes teaches Wanda how to use her chaos magic better but for now their relationship seems on edge.