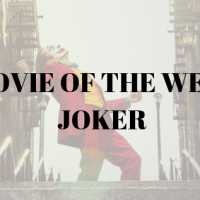 MOVIE OF THE WEEK: JOKER

For every Heath Ledger movie fan this movie is for you. The Joker does him justice as this movie helps us get into the mind of the villain—maybe a little too much, we actually develop a little sympathy for the poor clown.

The Joker a.k.a Arthur, is a very peculiar character. Yes, he is depressed but as every good movie villain, no one is just born a bad guy. Bad guys are actually the nicest people at first, as they have a very good way of manipulating people to get what they want. They are charmers.  Anyone seen Extremely Wicked, Shockingly Evil and Vile with Zac Efron on Netflix last spring?

However, Arthur is not that charming although at the start he does care deeply for his mother and focuses on being “normal” despite his mental illnesses, which are explored immensely in this film.

The Joker focuses on Arthur and his passion for comedy, as he becomes known for being a failed comedian. **NO SPOILERS** — but you can see where the clown theme is being better explored in this film.

FUN FACT: Did you know Joaquin Phoenix who portrays Joker in this film, studied Heath Ledger’s notebook on his own version of the Joker for The Dark Knight.

“I used to think that my life was a tragedy, but now I realize, it’s a comedy”—Joker.