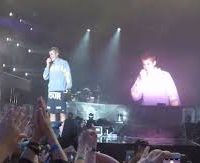 Justin Bieber has 3 of the biggest hits out right now- “I’m The One” (w/ DJ Khaled & friends), “2U” (his new collab with David Guetta) and, arguably the biggest of the bunch “Despacito” (w/ Luis Fonsi & Daddy Yankee). The latter is so big, in fact, that fans are asking him to perform it at shows. Only problem is… he doesn’t really know the words and having to skip it during certain performances.

Case in point, check out this video from the Biebz’s recent performance at the Summerburst Festival in Stockholm, Sweden. A “fan” threw a bottle at him after he said he couldn’t play it!

Hey Bieber… I’m not Scooter Braun…but ya might wanna learn the song, brah!