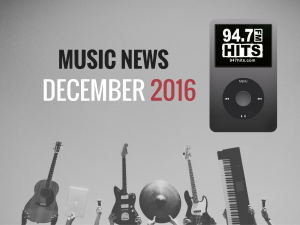 With finals, the holidays and the New Year quickly approaching it is important that we are able to find a silver lining in it all. What better than music to help us relax and clear our minds of everything that we have to do.

Here are three recently released albums that you’d maybe want to gift to a sibling, a partner, a parent, or even to yourself!

Bruno is back! I’m still not over the song 24K Magic and there he goes, already dropping a whole new album! In fact, Uptown Funk is still a bop that I listen to on Spotify! To be honest, the album somewhat reminds me of 90’s R&B and Hip-Hop, which I really love, so this album gets an A+ in my book!

If you want to hear some powerful girl power themed songs, here’s a new album for you! Little Mix’s fourth album Glory Days released in mid November is definitely one of their best. With up beat songs such as You Gotta Not and Power and slow ballads like Nobody Like You and F.U., there is an obvious reason why this is their first album to go number one.

Let’s take a moment to appreciate how some Canadians sleighed (get it??… lol)  at the AMAs this year!

The AMAs were live just a few weeks ago so here’s a little recap of what went down:

Drake had 13 nominations in many different categories including: Favourite Rap Song, Favourite Male Artist and Artist of the Year. THIRTEEN nominations! That’s insane! Drake beat the record for most nominations at the AMAs which was previously set by Michael Jackson with 11 nominations.

Shawn Mendes had his first ever AMAs performance and it was awesome! He performed both singles Treat You Better and Mercy from his newest album Illuminate. In true Shawn Mendes style he performed with his guitar and then ran to his piano.  Here is a link to his amazing performance!

Justin Bieber also took home four awards in the categories Pop/Rock Album with Purpose, Pop/Rock Song with Love Yourself, Video of the Year with Sorry and Pop/Rock male artist.

Now, what better to get you in the holiday mood than holiday music?!  Here are some of my faves that I have on repeat throughout the holidays!

All I Want for Christmas is You – Mariah Carey